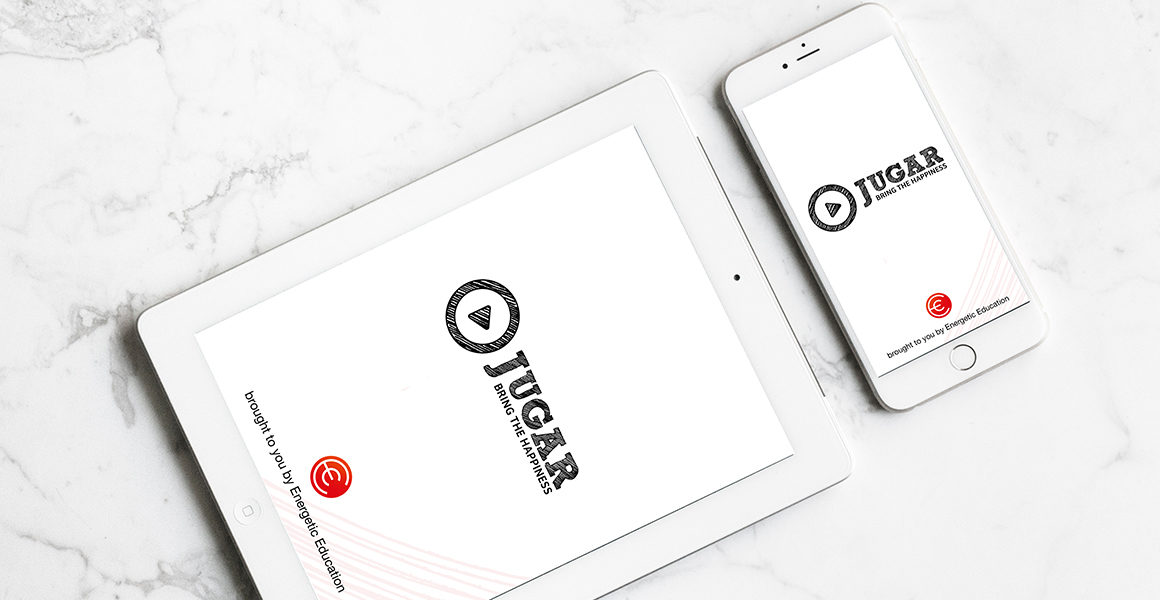 Take control of your morning, your day AND your life

The word Jugar comes from the Spanish language where it means to play. Jugar combined with a healthy and happy life is something that we all strive for daily. Play can add joy to your life, relieve stress, supercharge learning, and connect you with others and the world around you.

Jugar is a daily routine app, providing simple but effective strategies you can incorporate into your daily routine. “We are what we repeatedly do. Excellence then is not an act, but a habit”, Aristotle. Jugar will give you the tools and formula to take control of every aspect of your life. It will teach you how to bring happiness to your daily grind.

Our inner thoughts are critical; they can control the start and end of our day. Your morning will start with three questions. By answering the three simple Jugar questions, you will have a clear path and objectives for the day. Focusing on small wins and achievable goals for the day, you are creating a pattern of success. These daily questions will challenge your usual pattern of thinking and will focus on encouraging mindfulness and embracing gratitude. The regular practice of Jugar’s four key pillars; gratitude, play, giving and exercise is the key to becoming your best possible self.

Your bedtime ritual is a time for reflection on daily achievements and goals, acknowledging who you are. As per your morning routine, you will end the day with three more questions which will assist you to end with a positive thought. We have included simple breathing activities which revoke a relaxation response and assist with processing stressful emotions. We can’t always eliminate stress from our lives, but we can learn to deal with it in a healthier way.

The app is quite simple to use, download for free, hold the play button on the opening screen to swipe left and answer your AM questions. In the evenings before you go to bed repeat this process and swipe right to access your evening reflection questions.

The Jugar app has been designed by the team at Energetic Education. Our goal is to teach techniques and encourage participants to enjoy their life to the fullest.  Hence the tagline for this brand new app, ‘Bring the Happiness’, as that’s precisely what this app is designed to achieve.  Complete the ten-day challenge to experience the shift in your mindset, energy levels and your overall happiness. 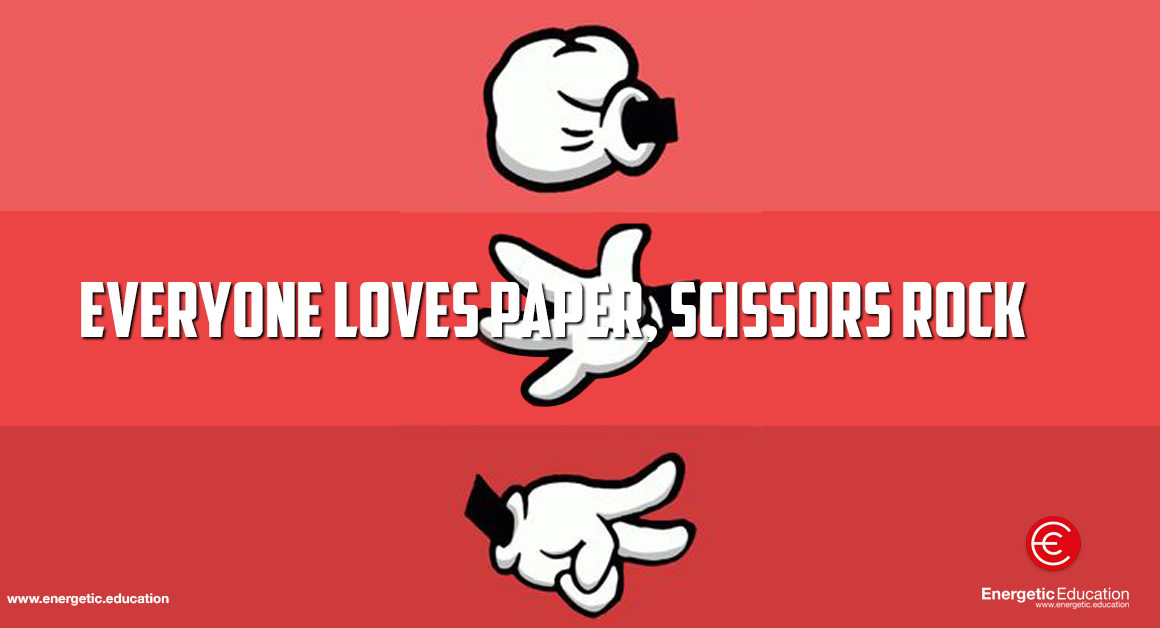 Paper, scissors, rock or rock, paper, scissors. Whichever way you say it there are no boundaries to the possibilities that this old classic can have in your classes daily.  Some of you might use this to solve any problems or to finish an argument. Others might use it to teach students a game where problem-solving, strategy and critical thinking are involved.  The beauty of using paper, scissors, rock in your class is that there are no boundaries. It is a superb activity that I have used with students of all ages inside and outside of the classroom.

The list I have put together below are my top five activities that involve PSR. I am sure that other teachers out there have many more that I have not heard of and I would love you to share. These education breaks can be used with students of all ages. If you have any questions or other activities that you use PSR for I would love to hear from you. Please leave a comment below.

Two players face each other and simultaneously throw out one of the following hand signals: rock, paper, or scissors. Rock is formed by making a fist. Rock “beats” Scissors, by blunting the blades. Rock is beaten by the signal for Paper, as Paper wraps up Rock. Scissors is formed by horizontally extending your middle and index fingers (a sideways peace sign). Scissors “beats” Paper by cutting it. Scissors are beaten by Rock, as Rock blunts Scissors. Paper is formed by holding your hand out straight, with the palm facing down. Paper “beats” Rock by wrapping it up. Paper is beaten by Scissors, as Scissors cut Paper. Generally, each player holds one hand out in front of their bodies, and they simultaneously chant, “One, Two, Three, shoot” and on “shoot,” both players display their signal. The player whose signal beats the other wins.

Description: This game is also known as paper, scissors, rock train. Students move around and challenge each other to a game of paper, scissors, rock. The winning student continues to play the game; the losing student has to put their hands on the winner’s shoulders and follow them around like a train carriage. The aim of the game is to be the last student left with all the other students behind you like carriages. The winner is then called Alex the Kid.

Description: Split the students into two equal teams. They get together in their teams and decide that the team as a whole is going to play ‘rock’, ‘paper’ or ‘scissors’. They then ‘face-off’ at the centre line of a gym or field and on the count of three they play their rock, paper or scissors. Remember, paper beats rock, rock beats scissors, and scissors beats paper. Whoever wins then chases the other team to the end line of the field or gym and catches as many people as they can on the way. Those that are caught now join the other team. The game continues until all the players from one team are caught. This game is suitable for all ages.

Description: Evolution is a variation on rock, paper, scissors. Everyone in this game starts off as an egg and makes a funny noise. After the egg is the chicken, which makes a funnier noise, then a monster with a funnier noise still and last of all is a human who doesn’t make a noise. The aim of the game is to get from being an egg to a human using rock, paper, scissors. If you are an egg you must find another egg, and play rock, paper, scissors with them; if you win, you then turn into a chicken and so on till you become a human. The game also works the other way around. If you are a monster and you lose, you then become a chicken.

Description: Students start the game with a partner in their own space. Each pair then plays the best of three rounds of rock, paper, scissors. The losing student then goes off to the side and waits for the student who beat them to be beaten themselves. The winning students continue to challenge other students. When they are finally beaten, they stand on the side, and all the students that lost to them are free to join the game again. The game is continuous, and the only way you will have a winner is if one student beats every single student without losing. It is a great game that will keep students occupied for a long time.

Description: Start the game by splitting the class into three even teams. This game is played exactly how a normal game of rock, paper scissors is played. Just like the standard game, Rock beats (tags) Scissors, Scissors beats Paper, and Paper beats Rock. When a tag is made, the student who has been tagged joins the team who tagged them. The game continues until only one team remains. Here is how each player needs to run around to indicate what team they are in: Rock – place hands on own head. Paper – place hands on own shoulders. Scissors – place hands on own hips.

If you would like the paper, scissors rock education break activities as a PDF, simply email me at dale@energetic.education and I will send them to you to keep with your other resources.